Animal meats, butter, whole milk, and some tropical plant oils, such as palm and coconut, are the main sources of saturated fats. Most of these fats are solid at room temperature. Saturated fats contribute to raise the level of LDL (bad) cholesterol with potential health consequences. They should, therefore, be consumed with moderation as part of a balanced diet. 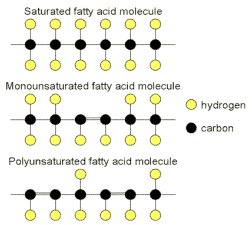 The omega number describes where the important carbon atom is located on the fat molecule. If this atom is third from the end, the fatty acid is known as omega 3 fatty acid (omega is the last letter of the Greek alphabet and means end). If it is sixth from the end, it is known as an omega 6 fatty acid.

The body requires about twenty fatty acids in order to live and operate. However, the human body can make them all but two of these: linolenic and linoleic. They can only be supplied by food or supplements. Omega fatty acids are a type of polyunsaturated fats that are especially healthy. They have a valuable role in reducing the risk of heart disease by lowering the blood pressure, protecting against plaque build up in the arteries and building healthy brain cells.

The three main origins for Trans Fatty Acids (TFA) are bacterial transformation of unsaturated fatty acids in the rumen of ruminant animals, industrial hydrogenation and deodorisation and during heating and frying of oils at high temperature.

The effect of TFA on coronary heart disease (CHD) is greater than that of Saturated Fatty Acids (SAFA) at equivalent dietary level. Indeed, not only does TFA increase the LDL or bad cholesterol like SAFA, but it also decreases the HDL or good cholesterol and increases the blood level of triglycerides.

However, given current intake levels of TFA compared to SAFA in Europe, their potential to significantly increase CHD is much lower than that of SAFA (source: TRANSFAIR study 95/96).

Hydrogenation is widely used by the food industry to transform unsaturated fats of the liquid form into saturated fats (please refer to the Processing section).

Hydrogenated fats are mainly used for margarine, shortenings products as well as bakery and confectionery products.